The next day (Monday) we got up and went into town, puttered around a bit, and went to a local café for a real Irish breakfast. It was huge – eggs, rashers, sausage, toast juice, coffee, and a scone (for those of you ignorant Americans who don’t know what rashers are, they’re kind of like Canadian bacon thickness and taste but in wide sliced American bacon size). It was then that we realized we’d forgotten not one, but two cameras back at the B&B. We walked to the bus station and grabbed a cab. This second cab driver was not nearly as entertaining as the first, but he definitely had some issues – like maybe Parkinson’s or something – because all he did was twitch and shake and stutter, poor man. So he drove us to the B&B and I ran inside for the essentials (cameras and red bull, you know) and when I’d come back out the cabbie had convinced my mother that it would be faster and just a few Euro more to take the cab out to Blarney castle instead of going back into town and snagging the bus. So we had our very own personal taxi van out to the castle and grounds. We were scheduled to be at Blarney for two-three hours, but we spent more than 5 hours down there! 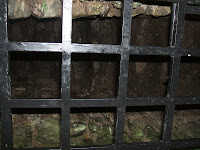 So we walked over to the castle and took lots of pictures and then we went down into the dungeon – OMG scary! Dark, dank, small, and terrifying. I couldn’t imagine anyone actually existing in one of those things. Then we went into the castle and I tried to climb the stairs without having a panic attack. They were so small you couldn’t fit your entire foot on them and there was no railing, just a thick rope running down the middle of the spiral and we kept stopping every stair. It was dark and enclosed and filled with people and I did NOT feel secure. We stopped off on a few floors of the castle to look around and after the second stop I had to force myself back onto the stairs. If there had been an exit from there, I might have just taken it and run off. But we finally made it to the top without incident and waited in line to kiss the germ-infested, pissed-on-by-the-locals Blarney Stone. Now why this particular stone, way the hell up at the top of the castle, is so important, I’m still not sure. It’s just one of the stones of the walls of the castle – dude I could’ve kissed any number of hundreds of other stones from the ground! But whatever. So to kiss the stone you have to sit with your back to the wall on this pad and lay back. Then you stick out your arms to hold on to two bars and the assistant grabs you round the waist and slides you up to the stone. Then it’s time to pucker up! 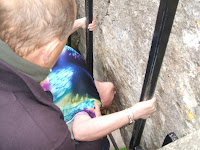 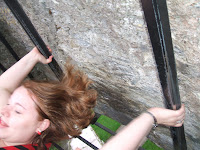 Mom went first, and she told me she was gonna kiss it. I got a great shot of her doing just that (or so I thought) and then it was my turn. I kissed the fucker, with full lip on stone contact. And then I got up and mom not only didn’t have a picture of me doing so, but she tells me she didn’t really kiss it! Her nose and part of her upper lip touched it and that was it – it was too quick for anything else. What a beotch! So it’s at this point I tell her why you’re really not supposed to kiss the Stone and why the lovely officer the night before had told us DO NOT kiss the Stone – because the locals go up and wee on it because they know it’s such a grand ol’ tourist attraction. Mom looks at me like I’m nuts at this point because I knew this from the start and I kissed the damn thing anyways (she’s not wrong, I tell you, I am a bit nuts). But we spent the next few hours looking at the grounds and the poison garden and witch’s kitchen. All good fun. Then it was Time To Shop! For those of you who know my mom and I, you’ll know that shopping for us is like an Olympic event and if it were to suddenly crop up at the summer Olympics, we’d be medalists instead of just mental. Blarney Woolen Mills is the SHITE. We got all kinds of awesome gifts there and spent over 100 Euro between us. (Now here I’d like to point out that they asked us if we wanted to pay by traveler’s cheques and we said no, let’s use the card and we can cash in the checks later when we’re running out of cash. We’ll come back to this fuckup later in our adventure.)
So we went back to Cork and missed some other stuff on our list – Blackrock Castle, St. Anne’s Church, the butter museum and City Hall where JFK gave a speech in 1963. But we’d had such a blast at Blarney we didn’t really care. We had to book it to the bus station to get out to the airport to rent the car. When we rented it, they told us it would be another 40 Euro a day to insure a driver under 25 in the car L so I didn’t get to drive. We got settled in the car and headed back to the B&B. Mom tried to make one right-hand turn into the right-hand (and thus WRONG) lane, but I shouted left lane, left lane! And we made it all right. We dropped the car off and walked into town because according to the lady at the B&B desk, parking was shite. So after walking around all the closed shops in town (because it wasn’t high tourist season and everything in Europe closes by 8) we went back to the hotel to repack our bags, preparing for our road trip the day after – and I assure you, nothing could have prepared us for what was in store the following day.
Posted by Jo Crosier at 1:42 AM